I had a terrific time hanging out with Don Moore this afternoon - spending a couple of hours getting to know such a storied scholar and gentleman was exactly what I needed to get in the right head space for embarking on a trip to Churchill in the morning.

As I mentioned in the previous post, this will be Don's 11th trip to Churchill, so he knows exactly what to expect upon our arrival tomorrow morning. I know we're in for a busy week, but chatting with Don about his past experiences aboard Buggy One and Tundra Buggy Lodge confirmed what I was hoping - there's still plenty of opportunity to shoot lots of pics and soak in every aspect of the experience along the way :-) 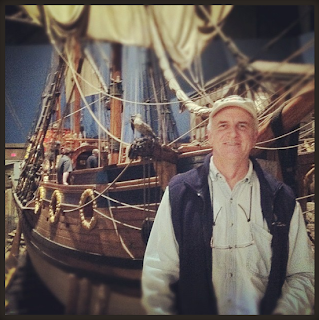 What a treat to accompany someone like Don on a tour of the Manitoba Museum. I've visited these exhibits at least a dozen times, but it was like I was seeing everything through a new set of eyes. I soaked up every display as if it were the first time. I have a new appreciation for display boxes, diorama installations and use of space within each exhibit. I now have a much better appreciation of all the things the Manitoba Museum does so well, and a better perspective on how they could give some of their exhibits a bit of an overhaul...

After touring the Museum for a couple hours, I took Don on a bit of a tour of some aspects of Winnipeg I thought he might appreciate. Not only did he see the foundations being put in place for our Canadian Museum For Human Rights, but he also saw our two white bison at the Assiniboine Park Zoo.

Thanks for hanging out with me for a couple hours today, Don - can't wait to learn more from you throughout the next week :-)
Posted by Andy McKiel at 7:26 PM